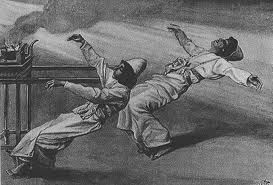 We have a fundamental choice in life: doing things G-d’s way or our own. The whole purpose of this portion is to show us that we need to do everything His way, not what seems good to us or as we think it ought to be done. The fire that descended from Heaven to the altar to consume the offerings brought in obedience to the commandments only did so because what was offered was exactly that: it was according to HIS commands and not ours. Man’s holiness is never a replacement for G-d’s. For that lesson in true righteousness and holiness 2 people suffered the ultimate judgement, death.

Let’s begin with Nadav and Avihu. Both these men brought an offering to the Lord that He had not commanded. What is so wrong in that, we ask? Surely it was a sign of their religious devotion or their zeal for G-d? The Hebrew though makes it clear that it was ‘strange fire’. The word for strange here can mean prohibited, but also foreign or non-Israelite. It may even have had its roots in a pagan practice. What is clear is that they were not in the tent of meeting either! Fire came forth from there to consume them, and people were called out from the Mishkan to carry them away outside the camp. So not only were they doing something (here applying incense to the coals on the altar) which only the High Priest could do and was commanded to do, they created their own place to do it in too, and that possibly mixed with pagan influence! They had invented their own way to worship G-d. Why did they do it? Motives abound, was it unbridled enthusiasm for G-d due to the experiences, religious fervour whipped up by the sense of G-d’s presence, or was it even jealousy? So wrong was this here that although they probably felt it was innovative, new and might appeal to the masses, it actually brought the wrath of G-d.

Why were these deaths significant? They were significant because had Israel watched and learnt from them, they would have learnt that they could do whatever they thought was right to do, in the manner and timing in the service to G-d. THEY WERE NOT FREE TO CHOOSE. In fact they had to everything G-d’s way. Reaching G-d in their own way was not an option; it undermined the very faith that was given as a revelation, not discovered. If we believe in the revealed will of G-d then we are not free to replace it with our own vision or theology or anything else. Innovation is not demanded but obedience.

Why can we not replace at will? Simply put, the whole service to G-d in the Mishkan was designed to show us one thing: Salvation, redemption and atonement, hoe sin is dealt with and its seriousness; ultimately it all points the way to the final and equal sacrifice for our sins in Yeshua Mashichaynu. If any part of it is changed we see a warped picture of who Messiah is. Any changes made to the way G-d has laid down for His worship will have consequences in the end product. The end product is the salvation of our people and from us to the whole world.

This is the spirit of our age, we are free to worship G-d how we choose, and no one can tell us or dictate to us. Actually the Scriptures tell us a different story: we are slaves to righteousness, bought with a price. We have a Master and a King, kind, good and ultimately beneficent, but still our Lord. We do not have the right to change, adapt or otherwise tinker with the Torah, our Judaism and our faith to fit what we think it should be. Even our traditions and oral teachings should be subject to this criteria; if something runs contrary to what the revelation at Sinai says then it should be challenged and if required removed. Then we shall have a resurgence of Judaism, the Judaism always envisaged by the Lord for His people.